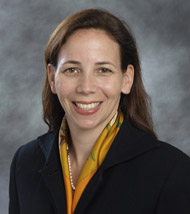 Marianne Hoffman devotes her practice to matrimonial and family law, including divorce, child custody, prenuptial agreements, paternity, domestic violence representation, collaborative law and mediation. She is a Fellow of the American Academy of Matrimonial Lawyers and has been named in Super Lawyers Top Attorneys in the New York Metro Area in the area of Family Law since 2013. Ms. Hoffman received her undergraduate degree from Wellesley College, with Honors, and graduated from University of Pennsylvania Law School.

Ms. Hoffman served as a law clerk to the Honorable William J. Lavery of the Appellate Court of the State of Connecticut. She then served in the General Counsel’s Office of the Federal Emergency Management Agency. Commencing in 1997, she has been actively engaged in the private practice of law including as a partner at Jones Morrison, LLP and previously as an associate with Kelley Drye & Warren LLP. She has a wide range of litigation experience in State and Federal Courts including, arbitration, trials and appeals in custody, support, equitable distribution, anti-trust, securities, bankruptcy and commercial litigation.

She is admitted to the New York State Bar, the Connecticut State Bar and the United States District Courts of the Southern and Eastern Districts of New York.