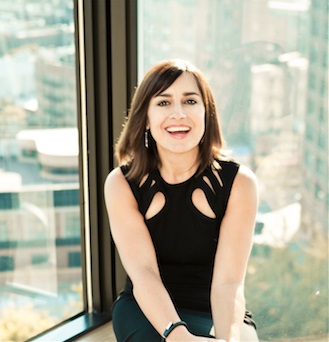 Executive, activist and entrepreneur, Sarah Robb O’Hagan has been described by the media as everything from "Superwoman undercover" to the "Pied Piper of Potential." She is a high-energy combination of disruptive business leader, fitness fanatic, and cheerleading mom, and has been named one of Forbes' "Most Powerful Women in Sports" and one of Fast Company’s "Most Creative People in Business."

As Chief Executive Officer of the fast growing indoor cycling company Flywheel Sports she is currently leading the transformation of the business through digital content and services. Prior to this role, Sarah became an internationally recognized re-inventor of brands, having served as global president of the $5Bn sports brand Gatorade, where she successfully led the business through a major repositioning and business turnaround, and global president of the luxury fitness company Equinox, where she reinvented the offering through a significant technology transformation.

Sarah has also founded a movement she calls Extreme Living. Provoked by the cultural shift that gave us kids with shelves of participation trophies, unfounded expectations in the workplace and tragically suppressed potential, she has created a manifesto for change.  Her book, EXTREMEYOU, to be published by HarperCollins in April 2017, provides people of all ages with the tools and support to discover their most exploitable traits, take big risks, deal with big failures and kick ass all the way to success. It is an inspiring and fiercely practical roadmap for individuals, teams and businesses who want to get the most out of their own unique capabilities.

Sarah’s career journey has led her through some of the world’s most iconic brands. Her early successes included the breakthrough marketing campaign she led for Virgin Atlantic Airways in collaboration with the Austin Powers movie, in which she rebranded the airline "Virgin Shaglantic" and turned a 747 into an international flying showcase. Later, Sarah transitioned to the sports industry, where she was a key member of the Nike team that launched the game-changing innovation Nike Plus in collaboration with Apple. What Makes Sarah more proud, however, are her self-proclaimed "epic fails," including back-to-back firings in her mid 20s and a close call with deportation from the USA - a period she fondly refers to as her "canyon of career despair." The deep learnings of humility, self-awareness and resilience she drew from that time became the basis of her Extreme approach to life, and informed her later successes.

Sarah is a passionate advocate for an active lifestyle and believes the lessons learned from sports and fitness can be applied to improve performance in the workplace. She has served on Hillary Clinton’s US State Department Council to Empower Women and Girls through Sports and as a trustee of Billie Jean King’s Women’s Sports Foundation. She also sits on the board of STRAVA – the social network for athletes. As a proud Kiwi America, Sarah is an active member of the World Class New Zealand Network, she remains committed to helping her birth country’s development, international competitiveness and economic growth.

Throughout her career Sarah has been recognized for her many achievements including being named to the top 40 Under 40 lists by the Sports Business Journal (2009, 2011, and 2012), Sports Goods Business (2010), and Crain’s Chicago Business (2010). and Ad Age magazine’s "Women to Watch" (2010). In 2014 Sarah was awarded the Sir Peter Blake Trust Award for outstanding leadership and in 2016 she was recognized in her native country with a "World Class New Zealand" award for leadership.

Sarah and her husband, Liam, and sons Sam and Joe and daughter Gabby live in New York. They have a chocolate Labrador named Edmund "Eddie" Hillary.