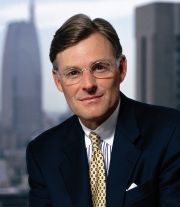 Mr. McGraw has led a transformation of the Corporation, consolidating 15 diverse units into three focused business segments, each one a market leader. In Financial Services, Standard & Poor’s is the world’s leading provider of financial analysis and risk assessments. In Education, McGraw-Hill Education is a leader in the U.S. pre-K through 12th grade education market as well as in the higher education and professional markets. And in Information and Media Services, the Corporation is a preeminent provider of essential news, information, analysis and solutions globally through BusinessWeek, J.D. Power and Associates and leading portals for the energy, construction and aviation industries.

The McGraw-Hill Companies had sales of $6 billion in 2005. The Corporation has a strong history of growth. Over the last 10 years, it has outperformed the S&P 500, producing an annualized return of 19% versus 9% for the S&P 500.

He serves on the Board of Directors of United Technologies and ConocoPhillips. He is chairman of Business Roundtable, chairman of the Emergency Committee for American Trade (ECAT) and a member of the Business Council. Mr. McGraw served as a member of President George W. Bush’s Transition Advisory Committee on Trade.

Mr. McGraw is chairman of the National Council on Economic Education and of the Committee to Encourage Corporate Philanthropy. He is also co-chair of Carnegie Hall’s Corporate Leadership Committee and a member of its Board of Trustees. Additionally, Mr. McGraw serves on the boards of the New York Public Library, National Organization on Disability, National Academy Foundation, Partnership for New York City, National Actors Theatre and Prep for Prep.

Mr. McGraw received an M.B.A. from the Wharton School of the University of Pennsylvania in 1976 and a B.A. from Tufts University in 1972.