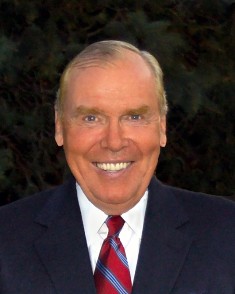 Born in Blackfoot, Idaho and raised in the rural West, Jon M. Huntsman has lived a remarkable and fascinating life. At the conclusion of the Twentieth Century, he was selected as one of ten Utahns who most influenced the state during the Twentieth Century. (Only two of those individuals are currently living.)

Mr. Huntsman attended The Wharton School of Business at the University of Pennsylvania, where he was the recipient of the Most Outstanding Graduate Award. Currently, he is Chairman of the Board of Overseers for The Wharton School, Americaís oldest and highest rated business school. Subsequently, he earned an MBA degree and has been awarded twelve honorary doctorate degrees at various universities. Mr. Huntsman is a former U.S. Naval Gunnery Officer. He served under President Nixon as Special Assistant to the President and as White House Staff Secretary.

Thirty years ago, Mr. Huntsman began a small entrepreneurial business. Today, Huntsman Corporation is one of the largest petrochemical and plastics businesses throughout the world, with major operations in 22 countries. In 1994, Mr. Huntsman received the prestigious Kaveler Award as the chemical industryís most outstanding Chief Executive Officer. He is the author of a book on corporate ethics entitled, Winners Never Cheat: Everyday Values We Learned as Children (But May Have Forgotten).

Mr. Huntsman is widely recognized as one of Americaís foremost concerned citizens and philanthropists. In 2000, he was distinguished as one of the three most generous Americans. His significant contributions to the homeless, the ill and the underprivileged have assisted thousands. His humanitarian concerns extend throughout the globe. In 2001, Mr. Huntsman was presented with the Entrepreneur of the Year Award. In 2003, he received the Humanitarian of the Year Award from CNNís Larry King. He has served the past eight years as a member of the Board of Governors of the American Red Cross and as Chairman of its Biomedical Services Committee (Americaís blood supply).

Jon and Karen Huntsman donated $225 million to establish and fund the Huntsman Cancer Institute at the University of Utah, now one of America's major cancer centers, dedicated to finding a cure for cancer based on genetic research. Mr. Huntsman donated significant funds to rebuild the country of Armenia after the 1988 earthquake, which efforts earned him the country's highest award--The Medal of Honor.

Mr. Huntsmanís service to the Church of Jesus Christ of Latter-day Saints (Mormons) has been significant. He is currently a member of The Seventies Quorum of the Church. He and his wife, Karen, are the parents of nine children and grandparents to 55.